I’m documenting the new things I’m seeing and doing as a conscious-life long Minnesotan who is a new resident of Wisconsin and, specifically, Milwaukee. I’ll be sharing those thoughts periodically as long as people seem to favorably respond to them.

A new Wisconsinite’s observations of his adopted state.

They are under-maintained, over-engineered, and quirky.

Lack of maintenance seems to be the norm. The majority of roads I’ve driven on have been spine-jarring, more like roads currently under construction even though they aren’t. I keep thinking back to a letter we sent out at the Minnesota House when the gas tax increase was being debated. It stated – amongst other things – that each driving Minnesotan, on average, was paying an annual $600 “Maintenance Tax” because Minnesota’s roads were poorly maintained. (A lot of that poor maintenance was a lack of funds for upkeep as a result of Gov. Pawlenty’s No New Taxes pledge.) If roads are in poor shape, car repair costs increase.

At first I thought the potholes and cracked asphalt was just our neighborhood. We live in a nice section of RiverWest, but it’s not far from UWM and affordably priced so maybe we’re lower on the priority list? But nope. The problem seems bigger than my neighborhood. Also, my parents commented when visiting: “Oh, they have Menomonie roads here.” It’s statewide.

The roads also appear to be over-engineered. While the Twin Cities’ MN-62/I-35 Crosstown and Chicago’s I-290/I-294/I-88 are certainly complex, sprawling exchanges, MAK’s I-43/I-94/I-794 is insane. Sure, the lanes aren’t necessarily any trickier once you get to know them (still learning), but they tower over everything, even the downtown skyscrapers. The concrete actually serves as a visual barrier to seeing other parts of the city. Traffic is a skyscraper in and of itself on the southwest entrance to downtown, a fact you might miss when driving as a part of it. Humbly drive Canal Street along the Menomonee River at night, however, and marvel at the engineering feats required to keep all of that concrete, steel, rebar and vehicle tonnage aloft. If you look closely, you might see Icarus perched on a light pole.

Critiquing roads is a national pastime, but some experiences for a new resident driver are just quirky. There appears to be an abundance of oddly angled turn lanes (N 6th St and W Kilbourn Ave to I-94), suddenly appearing entrance and exit lanes for normal seeming roads (W Capitol Dr and N Port Washington Ave), and every stop sign is double-sided, so as a driver you have two stop signs facing you, one on each side of the road. 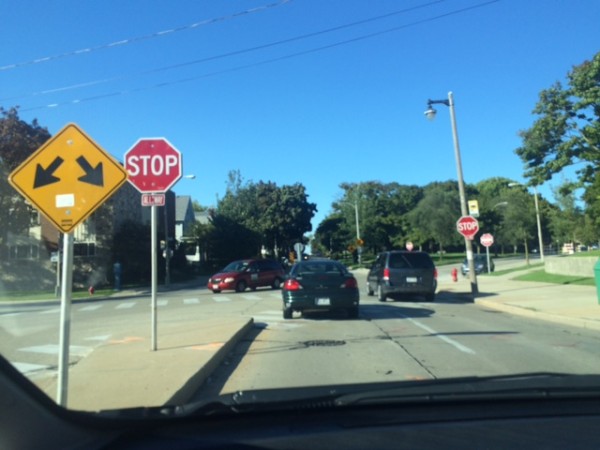 I really like the stop sign duality as it really helps visibility. I don’t remember this being a thing elsewhere in Wisconsin so maybe it’s just in Milwaukee? From a lay person’s perspective I bet this helps with safety.

It remains to be seen if these engineering oddities are abundant or just appear so because they are currently unfamiliar.

Even when it’s at their own peril.

I have had the privilege of attending and tailgating at Miller Park before and have seen (though empty) the massive parking lots around Lambeau Field. The tailgating swag on display at Miller Park on Labor Day did not disappoint compared to past experience. No, what got me was Tuesday night when it had been raining on and off all day and MAK (Milwaukee) was under a flash flood warning. People were still tailgating. In the flash-flood-warning inducing rain. The tailgating was less because the crowds were less, but I heard justifications like, “Well, I’m dry here,” multiple times on my way in.

Milwaukee (and Wisconsin generally) is full of characters. The best so far has been the customer service person I had at the DMV, which I’ll write up and post soon. She hasn’t been the only one, however, and I love how people have expressed themselves. Here’s a quick rundown of the characters and their mode of expression.

“We – my buddies and I – put solar panels on the roof of our vans to turn them into, you know, Energy Vans. We use Gorilla Tape and just stick them right on. That stuff is strong. We go down the street at 20 mph and, uh, have no problems.”

I swear he said “Energy Van.” Now, written down, that phrasing sounds nonsensical, a combining of two unconnected things through the power and strength of double-sided Gorilla Tap. During our conversation, I pictured a Burning Man inspired mobile generator powering…what…the van itself? I don’t know, but they are doing it renewably and cheaply. Joe had made enough sense up to that point I didn’t ask questions, so now I’m thinking I’m the dumb one not knowing what an Energy Van is.

Though he did pause before claiming he and his buddies “have no problems” so maybe their Energy Van isn’t street legal. Or they went 25 mph and a solar panel fell off and obstructed a bicycle lane. Or the Energy Van really doesn’t generate much electricity given all the residential roads are lined with massive trees. Or maybe it was just verbal filler.

I love bumper stickers because merely by seeing one affixed to a bumper, I know the owner of that vehicle and I are different. You like expressing yourself on the second largest tangible purchase you’ll make, I prefer to not damage my paint job and have anxiety over decisions lacking an easy undo. While driving I saw a beater sedan with three political bumper stickers (anything over one and the majority of your political discourse is via bumper sticker) denying any ties to dirty Liberals. “Hil-No” “I’m not Liberal” and “I don’t believe” all indicated my past profession might earn me scowls if the other driver and I were to ever converse. The “I don’t believe” I first thought might make them worthy of a book study: Anti-Liberal and Anti-Mulder: An Analysis of the Intersection between Conservative Thought and X-Files Hatred. However, the bumper sticker had been partially torn off. The remaining half had enough left to determine the word liberal and probably an expletive followed.

Only a few blocks after parting ways with Scully’s Beater I saw a different well-worn car with a plethora of bumper stickers. “I think, therefore, I’m liberal” is the only one I can remember.

There is a house along a divided boulevard that has a sign in the front room window. The sign looks like it was written by a person who has been kidnapped and held against their will scrawling a desperate “HELP!!” to anyone who may see it before their captor notices their desperate plea. It reads:

There is no parking allowed on that boulevard. On either side of the street.

That’s all for now. Milwaukee seems like an ok place to live.