DMV.  Pop culture equates D-M-V as a four-letter word, though my past and recent experiences would argue unfairly.  What did I discover on my interaction with the Wisconsin Department of Transportation’s Department of Motor Vehicles?

Moving to a new state means updating everything: voter registration, utilities, insurance, license plates, and driver’s license.  I’ve had a Minnesota driver’s license since I earned my learner’s permit so the prospect of a Wisconsin license had me sad.  I was pretty certain my new driver’s license would not be as flexible as a practicing yogi like my Minnesota license.

I also had questions.  Would I need to take the road test?  How much would this cost?  Could I get a cool license plate like the Minnesota Bicenntial?  If I had to take a road test, I should review the motorist’s handbook for unusual street sings and practice parallel parking (Parking success rate on a three-point turn: 35%.  Success rate on a five-point turn: 95%.  Parking rate where I get irrationally angry and give up on spot: 5%).  With a new license plate I no longer had GBP as my final three letters, an unwanted, unintentional support for the Green Bay Packers as a Minnesotan. 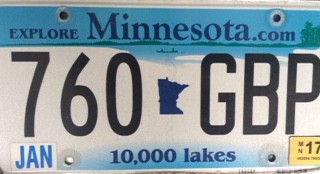 Forced on a Viking’s Fan in Vikings Territory

When I bought my car, the dealer said people either loved or hated the plates, and one guy had refused to take them.

I Over Prepared (Who’s Surprised?)

I went on the Wisconsin DOT website and read about everything.  (If you are a new resident and want to know where to start, go here.)  There was the ability to fill out and pre-submit the necessary driver’s license form online.  I did that.  I reviewed all the documents I needed to prove I was a Wisconsin resident.  Passports are wonderful in proving you are yourself.  I checked and doubled checked that I would not need to take a road test because my Minnesota license was current.  Nope, no road test.  I skimmed the driver’s handbook anyway.  Though I did not practice parallel parking – probably backwards priorities.  I reviewed how much I would have to pay and did not find a personalized plate I thought was cool.  That made me sad again.

Then I drove to the DMV.  My main Minnesota DMV for years was on the second floor of a Sears department store.  It was crowded, chaotic, and you were never really sure when your number was going to be called, but they gave me tabs and updated my license.  Most of the difficulties had to do with limited space; you sat in what felt like another department of Sears (second floor is housewares, luggage and automotive bureaucracy).  So when I arrived at the DMV and it was one tenant of a strip mall with a parking lot in bad need of repair, I was prepared for uncertainty and anxiety.

And didn’t experience it.  A check-in clerk asked me what I needed, gave me the necessary forms, and took my picture for my new Driver’s License (I should have gotten a haircut first).  She also told me I would have to re-fill out my driver’s license form on paper.  Though the DMV website had emailed me a code for the DMV office to scan for my application, the office did not know how to access the DOT database. Prefilled forms could have been real slick.  Missed efficiency.

I waited maybe five minutes before my name was called and I met Rose (not her real name.  I don’t remember it.)  Rose was short, nearer to retirement than to my age and spoke as if she was from the northeast, not the northwoods.

“Hi, I just moved to Wisconsin and need to get a new driver’s license and registration…”
“Do you have your forms?”  Rose stared at me.
I had organized the forms and supporting documents for ease of retrieval but the DMV window was awkward to stand at with a briefcase.  “Sure.  They’re in my briefcase here…”
“You need to have everything ready for me when I need it.”  Rose was in a hurry.
“Okay.”  Pause.  This was going to be awkward.  I had not even handed her anything and was being barked at.  I became tense, and, despite my attempt organization it was apparently my fault things were not going light speed.
Me being flustered must have prompted further explanation.
“They time everything.  We have a clock on our screens and if we don’t do things in a certain time the clock turns red.”  She added stress to the interaction because she viewed it as her job.
“Well that’s inflexible.  Helping me is going to take longer because I’m new.”
Rose typed a bit.  “Ever since Jimmy John’s came in everyone has to be fast.”  I’m not sure if she was just making a pop culture reference, if Jimmy John’s and the DMV timing system are inexorably linked via a massive coincidence of timing, or if she has a local loyalty to Wisconsin-based Cousins Subs.
“So what do you do?”  Rose asked for my vehicle title.  Goodbye lien!
“I’m looking for a job.”  I summarized why I moved.  “I used to work for the State of Minnesota.”
“Have you looked at any government jobs?  Go to W-I-S-C.jobs.  You should work for the county over state.  Working for the state isn’t what it used to be.  Ever since they made cuts there are a lot fewer of us.  If I was looking, I’d want to work for the county and not the state.  W-I-S-C.jobs.”
“I’ll make sure to do that.  I also used to work for an IT company as a manager, so I’m looking at the corporate sector as well.”
“If you start a business, I’ll come work for you.  What is your wife studying?”  She’s not my wife, but that was not relevant here.
“Communications.  Speech.  Public speaking.”  I synonym stutter because I’m never sure which words will click so the person realizes she’s studying what they typically feared in college.
“That must be why you speak so well.”  That was a nice compliment.

I just left a company where culture was everything, and our primary focus was building accountability and empowerment into everyone.  So I saw a lot at that DMV which I would have changed.  The timing was a stress rather than a tool.  The staff were not trained on everything, and were not confident in themselves on new things.  The language used was very Stage 2.  Regardless of truth, staff felt under siege from being too few for too large a task.

But what struck me was my interaction with Rose.  Once she starting opening up, she was efficient and helpful, but she only felt stress and doubt.  The DMV manager (who stopped by to help the agent next to us) was supportive yet put impetus on her staff to do their jobs, exactly as she should.  Wait times were short and the flow of the room made sense.  A lot of things were going right.

As I grabbed my new documents from Rose she handed me a small strip of paper.  “Your car has to pass an emissions test with 45 days.  Go to this website to find a location.”

Um, what?  How did I miss this?  And my car is a Honda made this century; it’s not going to fail an emissions test (it didn’t).  Why would I need…?

I took the paper and left.  It was a fine trip to the DMV.

I have a new title (no lien), new license plates (no mistaken Packers support) and a new driver’s license (which does not bend).  The process was not stressful.  I did not have to take a road test.  When I hit the road, I am a Wisconsinite.