Moving to a new state means experiencing a new local culture.  I expected, as a new Wisconsinite, I would have fewer culture shocks than being a new resident of, say, Alabama or Hawaii as I moved from another, similar, Midwestern state.  Similar is not the same, however, and, despite Wisconsin’s statewide smoking ban, I ended up searching through smoke for a bar to watch sports.  Smoking is still a problem in Wisconsin.

I am a Chicago Cubs fan and a cord-cutter so watching the Lovable Losers in the playoffs requires assistance.  During the regular season, a baseball fan has plenty of options, the best of which is MLB.TV which allows you to stream all out-of-market games for an annual fee.  It’s like Netflix for baseball, except MLB.TV’s parent company MLB Advanced Media also provides the backend technology for the NHL, HBOGo, WatchESPN, and a host of other services.  So it’s like MLB Advanced Media for baseball.

However, when the playoffs arrive MLB.TV goes dark because various cable channels and TV conglomerates pay for exclusive broadcast rights to the games.  If you pay for the MLB.TV playoff service you can watch a game on replay or live IF you have a cable subscription covering the channels broadcasting the games.  Seems backwards.

MLB Advanced Media, I will pay good money if you get rid of these exclusive deals and let me stream the games!

The Cubs first game of the playoffs as a new Wisconsinite seemed like a perfect opportunity to learn my neighborhood and try out a new eating/drinking/game watching establishment.  While walking the neighborhood previously I had walked by this corner bar: 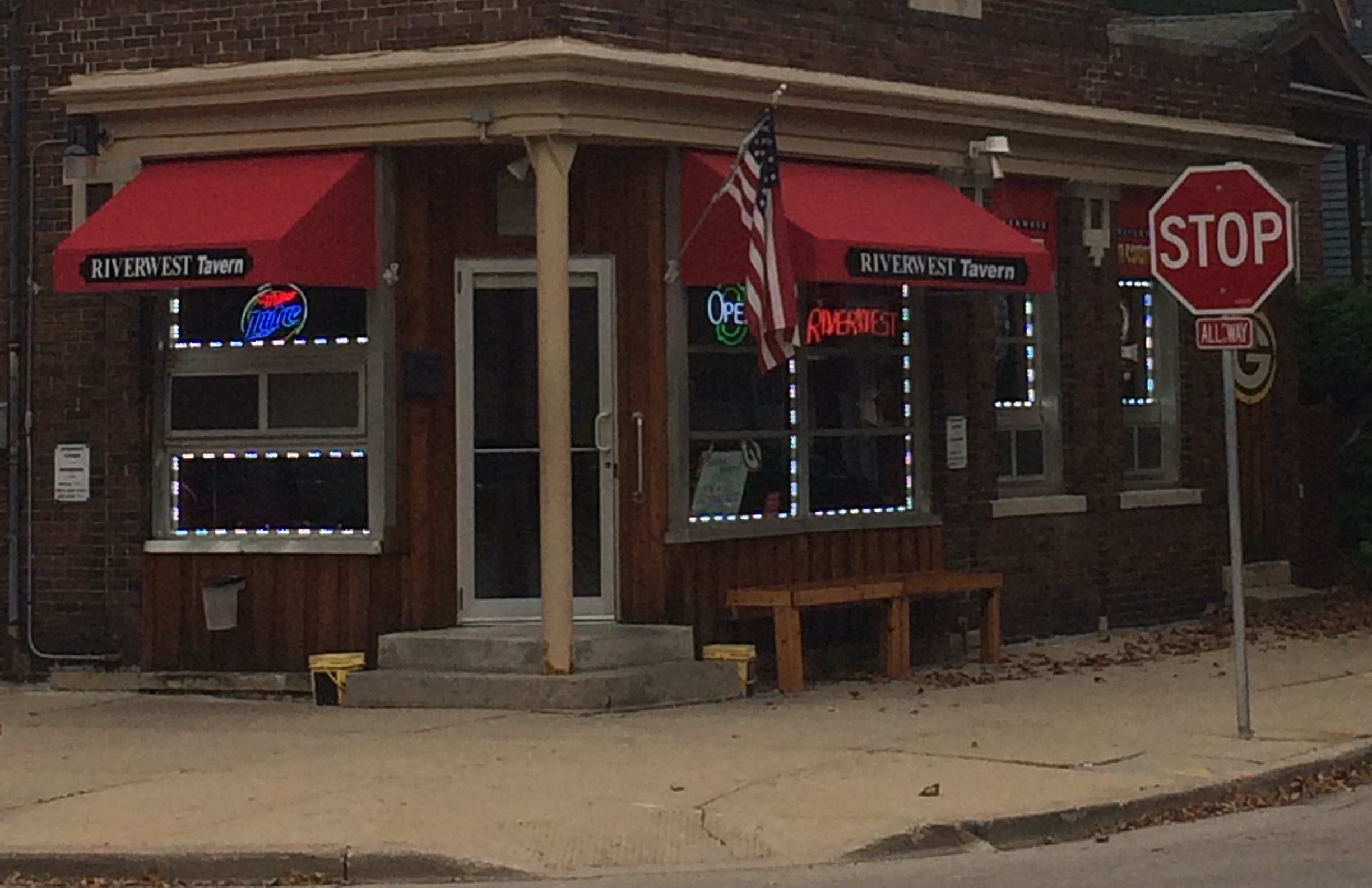 The Tavern had the front door propped open and an ALDS game was blaring away.  Excellent.  No need to go searching for an establishment that would play the game with sound.

Day of game arrives and No Apologies Advocate and I walk the few blocks to the Tavern.  Inside the front door is one pool table and a bar that juts into the middle of the room like a proscenium stage.  There is the faint smell of many decades of cigarette smoke and a whole rack of half empty distilled spirits on display along the back wall.  There are also three TVs.  The main one is turned to the preceding NL game with the sound on.  The two smaller TVs on the wings showing a TOS Star Trek episode and Batman Begins.  The bar is televising my interests and displaying the vices public health tries to mitigate.

We arrived half an hour early to ensure the Tavern would play the game.  The current bartender is a man in his 50s or 60s, he limps when he walks, wears clothes a size too large, and his bones are all angles.  The current bartender’s shift ends at game time, so he counseled us to tell the next bartender (currently playing pool with stoic intensity) we wanted to watch the game and everything would be fine.  We were to ask the pool-playing bartender because if the current bartender asked it was guaranteed not to happen.

When we asked, “Why?” the current bartender mumbled vague, fragmented sentences ripe for an overactive imagination.  All of this was said at just below normal conversational volume in a room slightly bigger than my first apartment.  With the puzzling feeling we had cracked a strange interpersonal code, we ordered drinks.

And then the current bartender light a cigarette and started smoking in the middle of the bar.

(Pause to Let that Sink In)

Now, looking back, I should have immediately left.  I am borderline capnophobic (fear of cigarette smoke) if simultaneously libertarian in action.  You want to smoke?  Fine; just do it legally and I’ll choose to leave your vicinity.  But I am new to this state and maybe there are different laws … or exemptions … or–I HAD JUST PAID FOR A BEER!  No Apologies Advocate and I, of course, were texting: 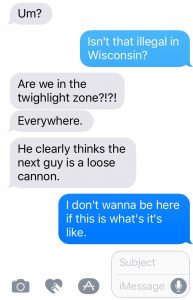 And then he lit a second cigarette.

We had to leave.  No Apologies Advocate confirmed I wanted to leave my beer unfinished and we stood up.  The current bartender looked at us confused.  “You’re leaving?”

Broadcast coverage of the game had started, and we spent the next three innings hopping from bar to bar looking for a place to sit, drink, watch and listen to the game.  The last requirement proved to be an issue.  It was a nice Friday night, and lots of people were out enjoying their favorite establishment’s Friday fish fry.  Plenty of places would show the game on TV, none would put the sound on for only one patron.  Fair, if frustrating.

The Cubs beat the Giants 1-0 on phenomenal pitching by Jon Lester. 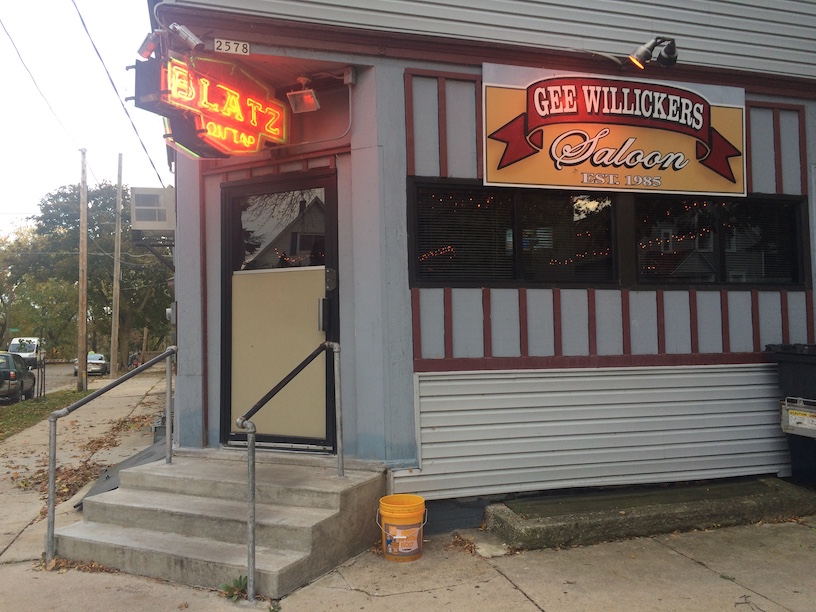 No Apologies Advocate found a corner bar for us to visit for NLDS Game 2.  Relaying the requirements for optimal Cubs enjoyment, the owner ensured her his bar, Gee Willickers Saloon, would provide. No Apologies Advocate, making a friend in Randy, relayed the story of the smoking bartender.

“Oh, you mean the Riverwest Tavern?” Randy asked, I imagine while cleaning a beer mug with a towel in stereotypical saloon owner fashion.

Randy, probably petting one of his two docile dogs who wander the bar to patrons delight, “Yeah, the owner is known for smoking and allowing smoking in his bar.”

The “current bartender” who required patrons to relay their requests to staff because he did not have a good enough relationship to do so was the OWNER.  Ugh.

Saturday evening I (and later No Apologies Advocate) arrived dressed to the Cubs royal blue nines to watch another Cubs victory.  Longer than wide, Gee Willickers Saloon has a short bar, four two person tables, an eclectic jukebox (from Beatles to Clarence Carter), and video poker.  The place was hopping, we made friends, No Apologies Advocate was hit on, and good music played.  Again, I couldn’t hear the game, but overall it was much better than a law-flouting smoky tavern.

Then we smelled something burning.

No Apologies Advocate and I looked at each other.  Is that cigarette smoke?  We looked around.  It was the end of the night, most people had left or had stepped outside.  Where was that coming from?  A couple of minutes later we determined a woman who had spent the night sitting alone at a table looking at her phone had been smoking in the single stall bathroom.

This perplexes me still.  First, the bar is not that large; the lower level of a house at most.  Someone was bound to notice.  Second, and more importantly, it was unseasonably warm that night for October. At over seventy degrees it was an ideal night if you had to step out to smoke.  If she wanted companionship, there were others who would periodically go outside.

We went searching through smoke for a place where this wasn’t going to happen and yet it still wafted after us.

The Cubs beat the Giants 5-2 on 3 RBIs by two Cubs pitchers.

The third game of the series proved to be a late Monday, as the Cubs lost to the Giants 5-6 in 13 innings, though SP Jake Arrieta did hit a three run home run.  I almost didn’t see it, however, because of the excitement at the beginning of the night.

Gee Willickers Saloon is a locals’ bar.  The same folks frequent it night after night, year after year, decade after decade.  The first night I met a man who had been coming for 30 years.  My bartender this night was a nice woman who was retiring from behind the bar after more than 20.  I couldn’t even call myself the new guy yet because I wasn’t even a regular.  This was my second appearance.

The crowd this Monday was all regulars and there were two bar flies drinking their unspoken usual while watching Family Feud when I arrived.  I think they humored my watching of the Cubs for the novelty of the team’s playoff appearance.

Yes, there was smoking by the bar patrons this night, but they all went outside.  There were no high school bathroom shenanigans, nor any ‘Screw the government and their laws enacted by democratically elected officials!’ bartenders.  Nope, there was just one Norm sized bar fly sitting on a stool.

With his vape pen.

At this point, I had to wonder if this was my punishment for the Cubs being in the playoffs.  All I wanted to find was one place, one business, willing to play a nationally televised playoff game with sound where I didn’t have to sit next to a smoker.  Wisconsin has a statewide smoking ban, this shouldn’t be hard!  Granted, Minnesota is well ahead of Wisconsin in terms of regulating and restricting vaping, but what are the odds that for three games in a row in a state where there is practically a neighborhood bar on every corner, I sat near a public smoker.

In our sports obsessed culture where it has taken over 50 years from the first Surgeon General report on the dangers of smoking to get to only 28 states in the U.S. banning smoking in all public enclosed spaces, I was 0-3. Three attempts, two smokers, and a vaper. 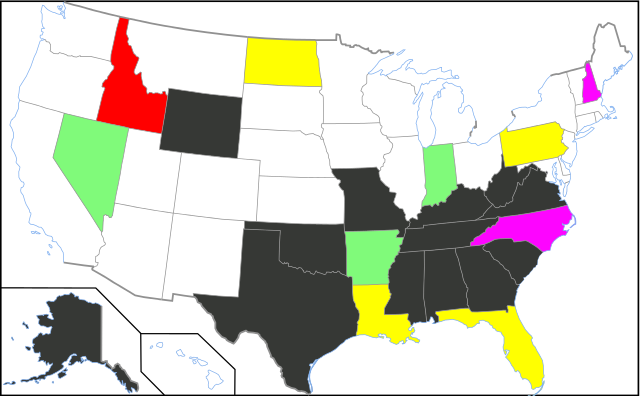 The bar fly left just as I was texting No Apologies Advocate that I was going to a different bar.  So I stayed that night.

MLB Advanced Media, how close are you to letting me buy a playoff package?  Because I am sick of this searching through smoke.

As a public health advocate, previously professionally, now personally, I know and have testified on the dangers of smoking.  Wisconsin’s smoking prevalence, according to the CDC, is currently 17.3% which is below the Midwest (20.7%) though above the national average of 16.4%

Part of my initial issue with smoking in a bar is I didn’t know Wisconsin’s smoking laws.  From this Wisconsin Legislative Reference Bureau brief, Wisconsin’s statewide indoor smoking ban took effect July 5, 2010.  The law covers all enclosed spaces, public and private, with the following exceptions:

Enforcement, like most states, is based on public reporting of violations. If you wish to report a violation of the indoor smoking ban, Wisconsin has an online report form.

Vaping is still new, and there is not the deluge of data documenting the health effects of vaping like exists for smoking tobacco.  The FDA has decided to regulate e-cigarettes and the CDC focuses on getting folks to quit nicotine whatever their ingestion method.  The public health dangers are well established enough that august organizations like the American Lung Association are against vaping in public.

One of the main arguments for vaping is the user receives less nicotine and other chemicals than with a cigarette.  When pushed on how a vape puff compares to a cigarette puff individuals supporting vaping push statements like this:

Also, unlike cigarettes, there is not a set “dose”. How many puffs it takes to equal one cigarette is a question that only graduate level physics, chemistry, and biology studies could answer for a given device and user.

That’s a fancy way of saying we don’t know and don’t want to find out.  Puff at your own risk.

Wisconsin does not have a statewide ban on vaping akin to smoking.  Most states with a vaping ban fold vaping into their existing regulations on smoking.  Wisconsin has a few local ordinances which ban vaping in enclosed workspaces but the City of Milwaukee and Milwaukee County are not included.