When you move to a new place there are things you think about because you know they will change (mailing address, insurance coverage and cost, and, if you are me, local elected officials).  There are other things you don’t think about because they are part of a cultural background and as a stranger in a strange land you don’t know they change (Every one eats at a Friday fish fry, Neighborhoods set days/times for Trick-or-Treating, and, if you are not me, local elected officials).  One thing I never considered when moving to Milwaukee was that my tap water might not be safe to drink.

A Service Line Lined with Lead

I never considered my tap water might not be safe to drink because clean drinking water is an expected government service across the country.  Perusing Twitter recently, my state Senator tweeted a Milwaukee Journal Sentinel article stating the Milwaukee Health Department will distribute free water filtration devices to residents living in homes with water service lines made of lead.  When I visited Senator Lena Taylor’s office last month her staff had told me lead poisoning was a key issue for her given some Milwaukee children have higher blood lead levels than Flint, Michigan.  As a public health advocate and former employee of the Minnesota Department of Health, I was familiar with the dangers of Lead poisoning and was curious what MKE neighborhoods have lead service lines, so I called the Health Department. 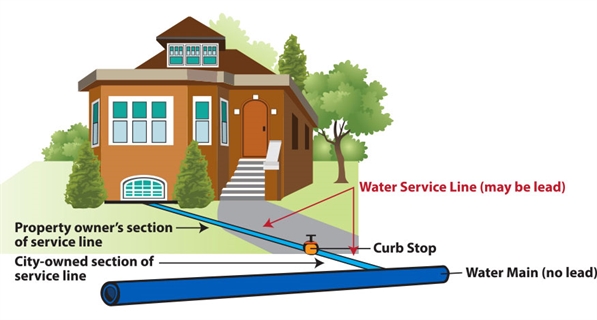 Having a lead service line means that even though clean water is coming from the treatment facility through the water main, lead could leech and contaminate water at an individual property.

It did not bother me that my home might have a lead problem.  It bothered me that I was unaware of the lead problem.  Little did I know Milwaukee’s lead legacy was just part of the whole.  The whole state of Wisconsin has a lead legacy.

Lead poses significant health risks.  The greatest risks are to infants, young children, and pregnant women.  Since lead affects the brain, though, the CDC has stated there is no safe level of lead exposure.  Zero. 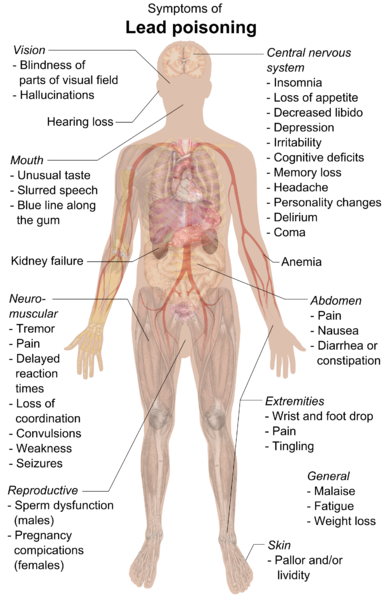 Lead breaks down the body.

Exposure to high levels of lead may cause anemia, weakness, and kidney and brain damage.  Exposure is worrisome, as after lead is absorbed it is stored in bones, blood, and tissues and results in continual internal exposure.  Generally, lead affects children more than it does adults.  Children tend to show signs of severe lead toxicity at lower levels than adults, and exposure can lead to damage to the brain and nervous system, slowed growth and development, learning and behavioral problems, and hearing and speech problems.  According to the CDC, the medical and special education costs resulting from child lead exposure can be $5,600 per child.

If you prefer your public health education in a British accent you can watch while eating breakfast (like I sometimes do), here is John Oliver on Last Week Tonight.

Given lead’s dangerous health risks, there are steps you can take to reduce lead in your water supply.  These are from the Milwaukee Health Department’s website but awesome enough to replicate here.

In addition, any households with residents or visitors that include children under the age of 6, pregnant and breastfeeding women should also:

Here is additional information for mitigating the dangers of lead in homes (i.e. lead paint) and a primer on lead paint, lead in water and lead in soil. 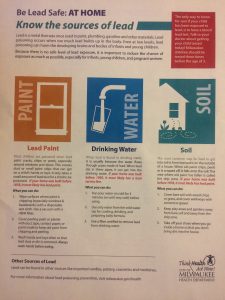 Click for a primer on the sources of lead.

As a citizen of Milwaukee – MKE – I began researching what my city was doing to mitigate lead’s harmful effects.  Thankfully, the Milwaukee Health Department has myriad programs to address the dangers of lead.  The city and community are also undertaking efforts pertaining to lead service lines.

There are two organizations partnering with the Health Department to distribute free water filtration devices.  The organizations are really advocating pregnant women and families with children and to get the devices, but they are eligible to anyone with a lead service line.

One of the devices attaches to the faucet (turn on facet, filtered water comes out), the other is a Brita pitcher on steroids.  If you are not eligible for a free device, through the end of the year, devices can be purchased at discount through Aquasana with the code: Milwaukee.  The discount is larger than other discounts on the site, so make sure to use your Milwaukee cred.

I visited SDC to receive my free water filtration device.  They handed me the faucet model, an extra filter, and information on lead (the primer above).  With the extra filter my device should last one year (or 840 gallons) before needing to buy new filters.  Installation was less than a minute; I spent more time figuring out which side of the sink to put it on.  No complaints here on design hindering adoption – this is as slick as it gets. 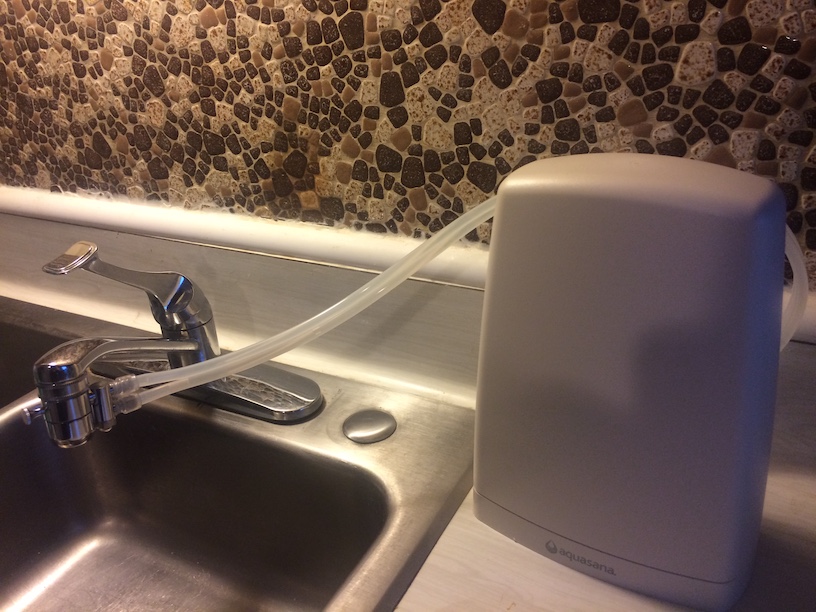 The aerator’s not much bigger either.

Filtration is a good stopgap, but the source of contamination – the lead service lines – needs to be replaced.  According to the Milwaukee Journal Sentinel, earlier this week the MKE Finance & Personnel Committee advanced a proposal to mandate full service line replacement (both city and property sides) which would require a property owner to pay to replace their side of a service line when the City replaces the other side of the line.  This would occur in emergency situations — such as service line fails, leaks or other damage — or during a planned infrastructure project.

The proposal also contains cost sharing provisions for property owners.  The City would foot the whole bill for the City’s half of the lead service line, while covering two-thirds of the cost of replacing privately owned service lines if the owner agrees to have city contractors perform the work.  Costs would be capped at $1,600 for the property owner, over a 10 year payback.  The proposal will be heard before the full City Council on November 22nd.

Back in January the MJS reported the total cost to replace all lead service lines throughout the cite would be between $511 million to $756 million.  Milwaukee’s lead legacy is expensive.

While the City of Milwaukee has the largest problem by volume, communities around the state have lead service lines affecting their drinking water.  The Wisconsin Center for Investigative Journalism estimates there are 176,000 lead service lines in Wisconsin.  The Wisconsin DNR was appropriated $14.5 million in funding to use in 2017-18 to assist property owners in replacing their half of a lead service line.  Given the costs in MKE alone come on the low end at $500 million dollars, this is a helpful, if small, amount compared to the statewide need.

The more I looked into the problem of lead in Wisconsin the deeper, and more systemic the problem revealed itself to be.  Lead’s existence in the state has become normalized, a fact we are hopefully waking up from.

Lead in Your Community

Call your local water provider and city/county officials to ask if you are affected.  Then ask what the plan is to replace lead service lines.

*Eau Claire Public Works has a tool to determine if your property has a lead service line.
**In Little Chute, you can determine if your home has a lead service line by contacting the Village of Little Chute Water Department at (920) 788-7522 or email.
**Madison started a concerted effort to replace all lead pipes in 2001.  It took over a decade to replace the pipes to all 8,000+ properties.  The city maintains a program for properties owners who discover they have lead pipes.
****Neenah, since 1994, has replaced ~2,080 lead service lines to the curb stop.  It’s possible the service line from the curb stop to the property may still be lead.

Dr. No to Science

Though the state legislature appropriated money to the DNR to assist with this problem for 2017-18, Wisconsin’s highest elected officials have not always treated lead as the public health concern it is.  Secretary Tommy Thompson, the Governor of Wisconsin from 1987-2001 and former U.S. Health and Human Services Secretary in the George W. Bush Administration has a complicated role in Wisconsin’s legacy of lead.  Secretary Thompson was criticized by the Union of Concerned Scientists for rejecting three scientists to the CDC Advisory Committee on Childhood Lead Poisoning Prevention in 2002.  The rejections, and subsequent appointment of alternative members, were done prior to a committee meeting where lead standards were likely to be toughened.  The UCS cited in their scathing report that this was the first time “an HHS secretary had ever rejected nominations by the committee or CDC staff.”

In their place, according to a Congressional report, Secretary Thompson appointed individuals with ties to the lead industry.  One appointee, Dr. William Banner, stated lead was only harmful at 7-10 times the CDC blood lead level at the time, a position that “either ignores or willfully misreads some four decades’ worth of accumulating data on lead exposure in children.” [UCS report]  In all, Secretary Thompson rejected one reappointment and two recommended appointments while appointing five other individuals, three of whom with industry ties.

Secretary Thompson was criticized for a politicization of science beyond just the lead advisory committee during his tenure at US HHS (2001-05).

When I have shared what I found with my landlord and neighbors I realized how normalized lead contamination was in the state.  My landlord and neighbors were already following the individual lead mitigation efforts I listed above.  My landlord stated every child growing up in Milwaukee was taught not to drink hot water and to bleed pipes until the water ran cold in the morning.  This is a great public health victory in terms of public awareness, and a troubling statement on our culture.

No one suggested to me as a new resident that caution should be taken with the water.  No one mentioned they bled their pipes or they installed their own filters.  The fact lead pipes are bringing water into homes is so well-known and normalized it has become part of the cultural background.  I don’t blame my neighbors; I look, sound, and act like I am from their culture.

But lead is dangerous.  Those 70,000 properties with lead services lines?  Here they are on a city map: 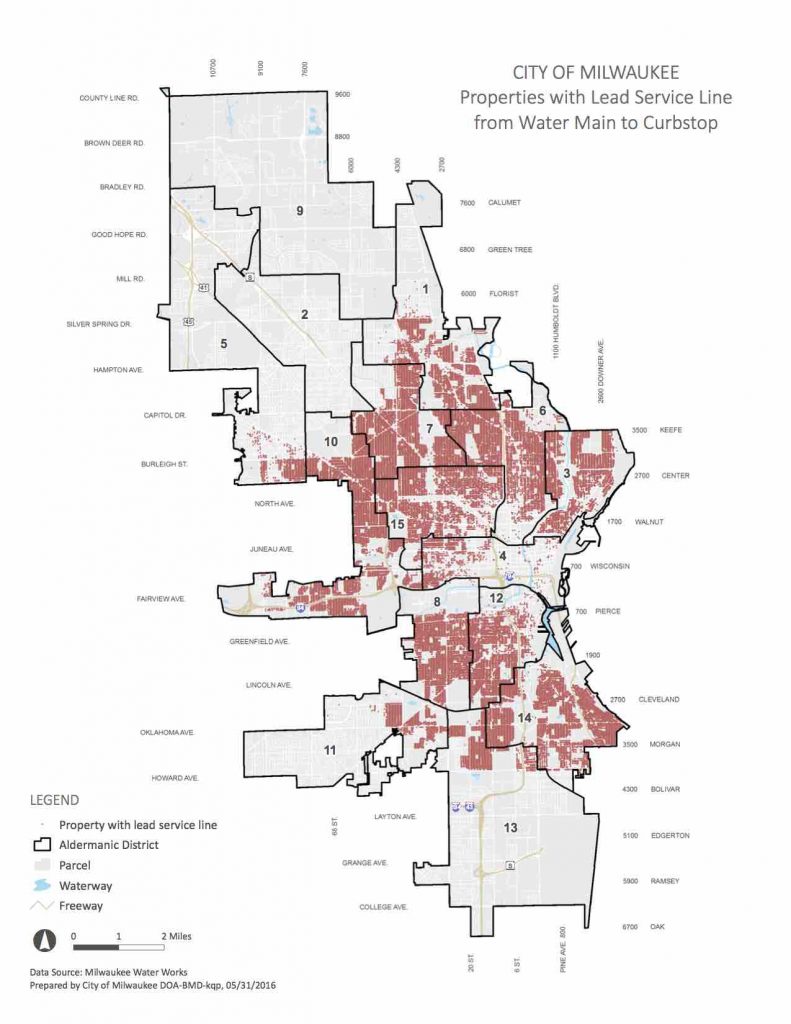 The problem of lead is everywhere.  The legacy of lead is statewide.  The dangers has been known since ancient times.  But the solutions are also known.  I hope the plethora of sources out there on lead in Wisconsin are a sign of public concern.  I hope the good steps being taken by the DNR and municipalities are born of a conviction to eradicate the problem.  So what can you do?

Let’s fix this legacy.  Let’s make lead a legacy of Wisconsin’s past.

Note: Some articles are linked to multiple times in this post.  This is meant to ease reading the source material gathered.