Skyfall, the 23rd official Bond Film, has opened to the typical Bond fanfare, but also continues the attempt of the Daniel Craig era to create serious film-as-art. While Skyfall’s predecessors Casino Royale and Quantum of Solace took the serious rather than campy route as well, Skyfall surpasses them as art.  This is largely because of of an Academy Award winning Director – Sam Mendes – and another star laden cast, but mostly Skyfall achieves this status because it prominently features and uses artwork to advance the plot. Paintings, the oldest visual medium, are used to heroic effect in Skyfall and frame Skyfall AS art.

The National Gallery of London

Skyfall is possibly the most Anglophile Bond movie yet, with sizable portions of the movie taking place in Great Britain or referencing “Britishness.” Therefore, it’s fitting that the first prominent use of art in the movie comes when Bond and Q meet in Room 34 of the National Gallery of London appropriately against a backdrop of quintessentially British paintings.

The scene surrounds Bond and Q examining and using a painting as a metaphor for Bond himself. The painting Bond and Q are contemplating is Joseph Mallord William (J. M. W.) Turner’s The Fighting Temeraire Tugged to Her Last Berth to be Broken Up, 1838 (1839). The allusions evident are stated in the film’s dialogue, but summarized, Bond’s position as an aging secret agent is reflected in the scrapping of the the celebrated and decorated warship the Temeraire.

It’s a simple comparative metaphor, but one that serves to underpin all of the personal angst Bond faces in the film. Leading up to this viewing of the painting every event sets up Bond as a broken Temeraire. After the viewing, Bond has his Q provided tools to maybe futilely attempt to redeem himself.

The straightforward comparisons between the painting and Bond may have been lost on the non-British movie goers without explanatory dialogue, however, the British would get the subtext. In 2005, The Fighting Temeraire was voted Britain’s favorite (or “favourite” in Britain) painting.

All History is Trivia

My favorite fact/connection regarding Turner’s painting in Skyfall is that in the early 1800s J. M. W. Turner lived at 119 Cheyne Walk in London. From 1923-26, Ian Fleming, the author-creator of Bond, also lived at 119 Cheyne Walk. This is what I like to call the “Inception Coincidence” (trademark pending) since in the movie Inception the Édith Piaf song “Non, je ne regrette rien” is used as a plot device. Marion Cotillard, who plays a prominent role in Inception, won an Oscar for her performance of Madame Piaf in the movie La vie en rose. Inception’s director, Christopher Nolan, was unaware of this fact at the time he cast Ms. Cotillard. 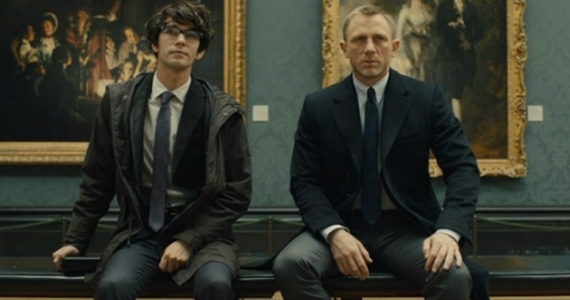 But there is more than one significant painting in the Gallery’s Room 34, and the two behind Bond and Q also have symbolic meaning.

Q’s Experiment on a Bond 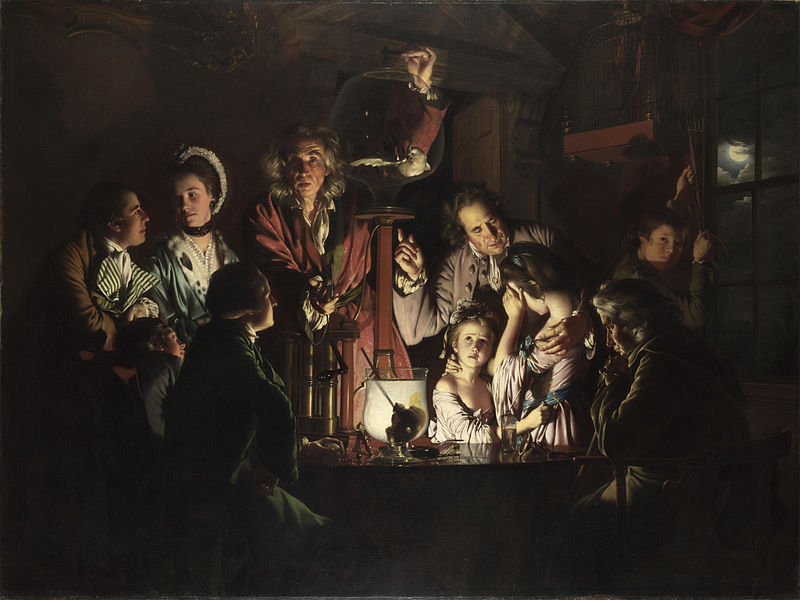 The painting behind Q is An Experiment on a Bird in the Air Pump (1768) by Joseph Wright ‘of Derby’. It shows a traveling scientist demonstrating the formation of a vacuum by withdrawing air from a flask containing a white cockatoo. On the surface, the subject is all about cutting-edge innovations in science and the demonstration of how person with knowledge of technology (i.e. the scientist) has power over nature. Cue the smug smile of Bond as he realizes it’s an appropriate backdrop for Q.

The description of Wright’s painting on The National Gallery’s website states the subject is REALLY “human drama in a night-time setting.” This may fit Q better, as the scientist (Q) has the power to deprive the bird of oxygen but whether he does is left unresolved. Q never directly kills anyone, and in Skyfall retorts he needs Bond because “every now and then a trigger has to be pulled.” And while Q may have advanced technology, how people react to his tech is out of his control. The reactions of the onlookers in An Experiment range from frightened to reflective to excited interest. There’s even a pair of young lovers indifferent to everything but each other. 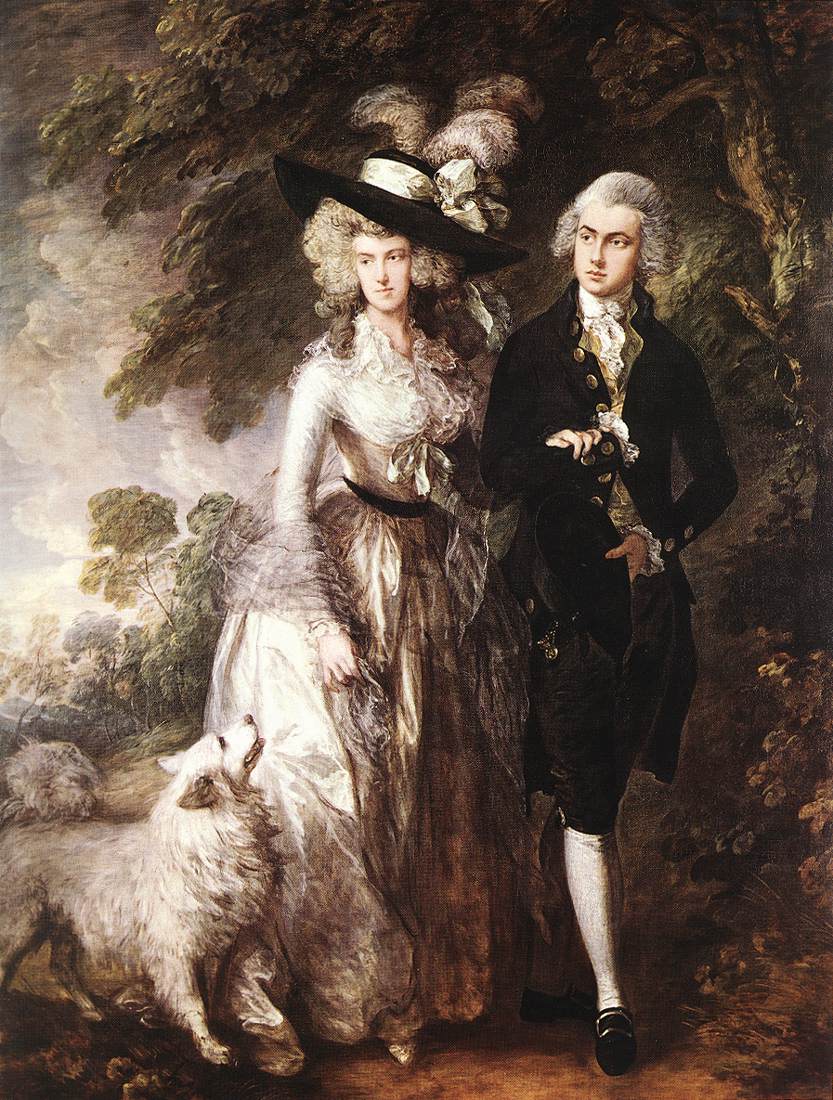 The one behind Bond is Thomas Gainsborough’s Mr. and Mrs. William Hallett (‘The Morning Walk’) (1785), showing a dog looking adoringly at Mrs. Hallett (who at the time of the painting was the still unmarried but betrothed Elizabeth Stephen). It’s a typical if very well done portrait of the young and wealthy in the late 18th century. There’s a potential allusion to Bond (as dog) and M (as Mrs. Hallett) walking with Kincade (Mr. Hallett) foreshadowing the end of the movie when Kincade walks with M at the film’s climax on the Scottish moors, but that’s a whole lot of allusion. Then, again, that’s the whole reason to write this post.

After leaving the Gallery, Bond travels to Shanghai to track down the bad guy from the opening sequence. The man is an assassin and uses a painting to lure his target into position. The painting? Amedeo Modigliani’s Woman with a Fan (Lunia Czechowska) (1919): 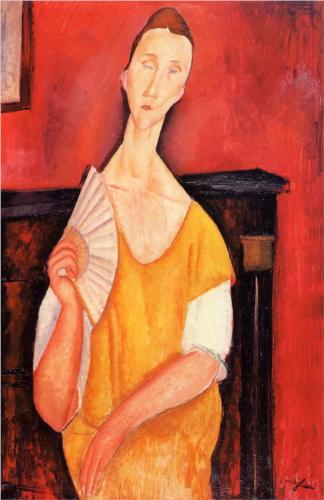 Woman with a Fan (Lunia Czechowska) (1919) by Amedeo Modigliani

The kicker here is Woman with a Fan was stolen in real life from the Musée d’Art Moderne de la Ville de Paris in what has been deemed one of the most daring art thefts in history. The May 19, 2010 theft was of works by Matisse, Braque, Picasso, Leger and Modigliani. The five stolen paintings are valued at over $123M. The paintings are still unrecovered.

Where are they now? The dramatic theory would be the paintings were stolen for wealthy (Bond Villan-esque?) art collectors around the world, potentially Asia where the art market has been booming for a decade. The appearance of Woman with a Fan in Shanghai for Skyfall would be a case of art imitating life, or, rather, art imitating art. An equally likely real world result is the paintings are being used by international drug and weapons smugglers as a way of easily carrying around large sums of money. Art is often exchanged instead of cash because of ease of portability even if the art is only worth a fraction of its auction value on the black market. A depressing third result, however, is possible. The thieves may have thrown the masterpieces in the Parisian trash after being questioned by police but before their arrest.

That’s worse than Rene Russo burning a Renoir in The Thomas Crown Affair because this destruction might be real.

No Duke of Wellington

Bond heads will note the first Bond film, Dr. No, pretended to explain the whereabouts of Francisco de Goya’s portrait of The Duke of Wellington (1812-14) which was stolen from the National Gallery of London in August 21, 1961. The Goya theft occurred only 19 days after putting the painting on display and was the first theft the National Gallery ever had. The theft date is important because the Goya was stolen 50 years to the day after the Mona Lisa was stolen from the Louve. Skyfall was released 50 years after the release of Dr. No. Amazingly, both the Mona Lisa and the Wellington were eventually returned after appeals to national cultural identity (French and British respectively) and serious police work. 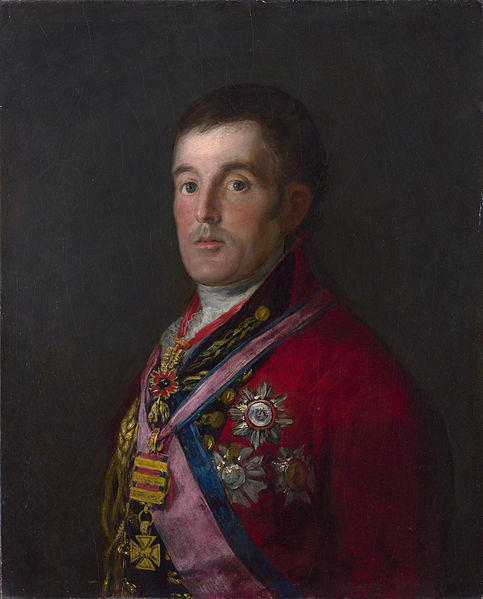 Seriously, this stuff is better than a conspiracy theory.

I’ve seen numerous comparisons on the internet between the Bardem scene (you know the one) and Goya’s Saturn Devouring his Son (1819-23). The allusions are interesting: both Goya and Bardem are Spanish in origin, both scenes are grotesque, and the relationship between Bardem’s Silva and M in the movie could be stated as family eating family. I’m not sure if that’s intentional and I’m not sure I buy it entirely, but it’s another Goya connection. 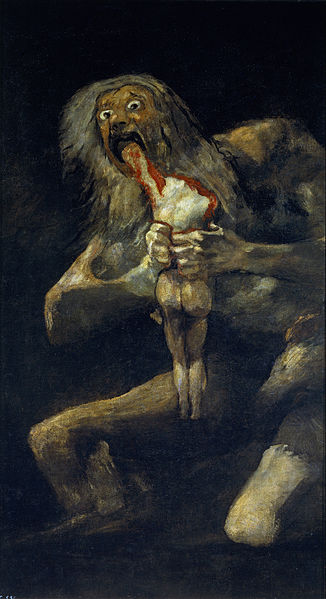 Fascinating side note on Saturn Devouring his Son: Goya painted it directly on the walls of his house. It and other murals from the home were transferred to canvas after his death. All the murals suffered greatly as a result.

At the end of the movie, Bond meets Mallory and they talk shop, British style. On the wall in Mallory’s office is this: 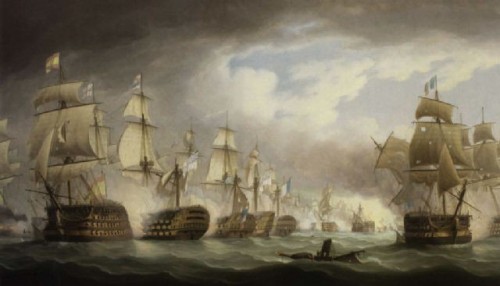 (The blogger Judith I Bridgland speculates it’s HMS “Victory” Heavily Engaged at the Battle of Trafalgar by Thomas Buttersworth but it’s a common subject.)

What I absolutely LOVE about this painting’s use in Skyfall is that the shot is of Mallory and Bond facing each other, the massive painting between them. The painting is the SHOT, but the meaning is derived from the painting’s subject: The Battle of Trafalgar.

The Battle of Trafalgar was fought between the British, led by Lord Horatio Nelson, and a larger Franco-Spanish fleet off of Cape Trafalgar on October 21, 1805. Lord Nelson defeated the Franco-Spanish fleet by dividing his smaller force into two groups and turning them perpendicular to their enemy. The highly unusual move allowed the British to surround a portion of the opposing fleet and force a decisive result. Lord Nelson’s fleet inflicted heavy losses on the Franco-Spanish while not losing a single British ship. Lord Nelson was mortally wounded by a French sniper in the battle though he lived long enough to know the battle’s result. It’s viewed in Britain as the quintessential British victory using Britain’s implement to world dominance, its navy.

The Trafalgar painting lends whole new meaning to the Scottish moor shootout at Skyfall‘s end. That’s Skyfall’s Battle of Trafalgar: Bond, the Brit against the odds, splits his forces and uses unconventional tactics to achieve a great British victory over a Spaniard (Javier Bardem playing Silva). M can also stand in as a Nelson figure given both she and Lord Nelson are both felled by a lucky shot.

But wait, there’s more. Remember the first painting that Bond was compared to? The Fighting Temeraire?

(Note: The post, “Skyfall as Art,” was originally posted on November 25, 2012 on the The CNotebook’s LiveJournal platform. Updates have been made.)

The Fighting Temeraire Tugged to Her Last Berth to be Broken Up, 1838 (1839) by Joseph Mallord William Turner
http://www.nationalgallery.org.uk/paintings/joseph-mallord-william-turner-the-fighting-temeraire

An Experiment on a Bird in the Air Pump (1768) by Joseph Wright ‘of Derby’
http://www.nationalgallery.org.uk/paintings/joseph-wright-of-derby-an-experiment-on-a-bird-in-the-air-pump

The Duke of Wellington (1812-14) by Francisco de Goya
http://www.nationalgallery.org.uk/paintings/francisco-de-goya-the-duke-of-wellington

HMS “Victory” Heavily Engaged at the Battle of Trafalgar by Thomas Buttersworth
http://www.bonhams.com/auctions/10191/lot/88/

The Star Tribune Article that Started Me Down the Skyfall as Art Rabbit Hole
http://www.startribune.com/entertainment/blogs/177645271.html

The Judith I Bridgland Blog