There came a point in the five minutes with my eyeball under a steady stream of water attempting to flush out the oil that was making me familiar with what a minor level of hell feels like where my body accepted this as my new normal.  I would forever be stuck with my head in a sink, my sight restricted to a big light blur, speaking to the disembodied voice of my friend behind me.

Since I am not dictating this post from a sink, let’s back up.

Dinner and a Movie

This weekend I visited a friend – let’s call him ComicsGeek – to assist with afternoon house repair/maintenance work.  ComicsGeek was kind enough to invite me to eat dinner with him, and we decided on tacos as ComicsGeek’s green thumb had grown a harvest of colorful, flavorful, hot banana peppers. 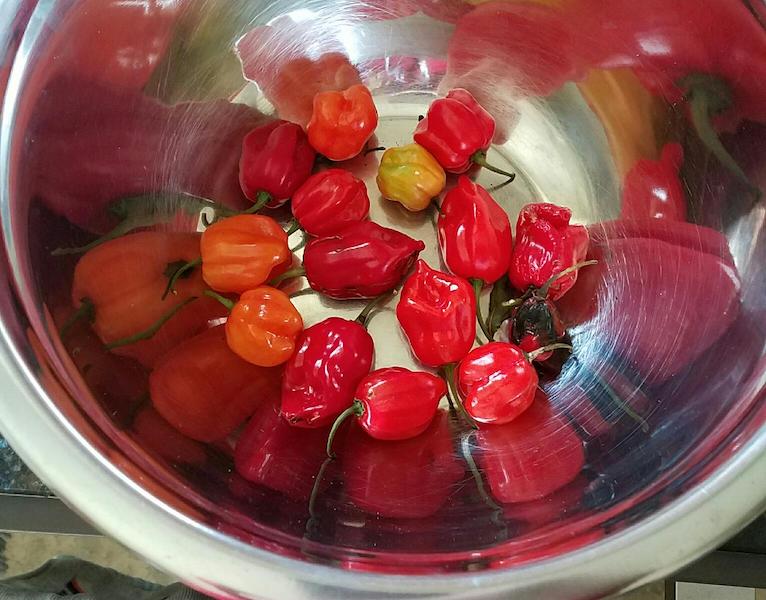 Tear-inducing, when applied directly to the eye.

ComicsGeek’s kitchen, ComicsGeek’s direction, so I was drafted into food prep asked to dice up the hot peppers.  This I did, tacos were prepared, and we sat down to eat and watch a movie.  The tacos proved hotter than we expected, but tasty and tolerable heat wise.  Never did the heat feel out of control for this former spicy food eater slowly sliding into Upper Midwestern spice intolerance.

Natives of the Upper Midwest and their cuisine are not known for the use of spice.  When your native cuisine includes cheese curds, Lutefisk, Grape Salad, and Hotdish, that catch-all culinary concoction of starch, meat product, and a canned Cream of ___ soup, ghost peppers may be mistaken for the incorporeal manifestation of dead peppers.  My favorite Thai restaurant in the Twin Cities had a spice scale from 1-5.  I normally ordered a 2.  I could handle 3 depending on the day.  A colleague of my thought 1 was pushing it.  This has led me to mentally create an approximate scale of heat tolerance.

An hour and a half later, just as the movie was about to end, I felt an itch around my eye.  I itched it.

Stumble to the bathroom.

The pain, while intense, was not so awful that I lost my wits.  I was not going to try and clean out the oil from my eye while still having oil on my fingers–DEAR LORD, WHY AREN’T MY TEARS EFFECTIVE?!

ComicsGeek, talking to me the whole time, handed me a shot glass.

Under other circumstances I would have looked at him incredulously, waiting for further explanation.  Instead, I grabbed it like a drowning man grabbing a life raft – which was a preferred position at the moment, because drowning in water would flush the pain away.

ComicsGeek had recently seen a trick at the bar when a friend had gotten jalapeño oil in her eye. The bartender gave her a shot glass filled with water, she pressed it to her eye socket, opened her eye and the water flushed out the oil.  One shot.  First try.  Pain free.

I was not able to get a good seal on my eye socket and I proceeded to more pour water down the front of my shirt than relieve myself of pain.  Four or five shot glasses.  Many tries.  Still pained.

ComicsGeek has a high necked faucet in his kitchen. I walked/was guided into the kitchen, stuck my head under the facet to use it as a makeshift emergency eyewash station. full power, room temperature water.  Initially, my face did not want to open my eyelid to a constant stream of water, but after the initial 15-20 seconds of weird discomfort from feeling water running over my eyeball screaming in pain, the discomfort left and I could keep my eye open. 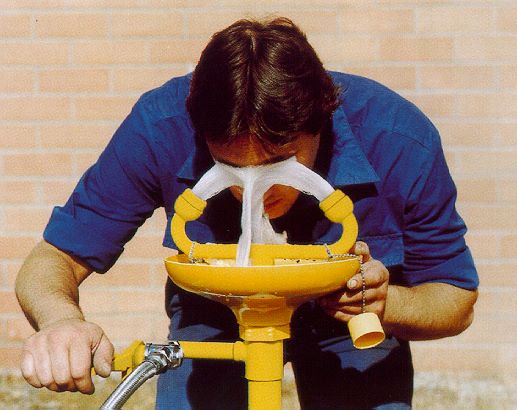 Would have been nice to have.

Five minutes is a short time if you are running a mile.  When you are flushing your eye with water, five minutes is incalculable.  It’s not forever, but it is long enough to contemplate, “How did I get here?”

After five minutes under the faucet my eye felt relieved enough to remove from the stream.  Now my cheek and forehead still had some mild tingling, so I washed my hands with Dawn dish soap, which proved excellent at binding with whatever oil residue was still on my face.  ComicsGeek, ever the scientist, had great suggestions for mitigating the pain.

Giving my eye the once over, ComicsGeek said, “I expected it to look much worse.”

A Note on Hot Peppers

The chemical irritant in peppers which humans (and other animals, save, presumably, the Honey Badger) equate with “heat” is called capsaicin.  Capsaicin concentration is measured via the Scoville Scale, and the corresponding Scoville heat units.  The Scoville Scale is performed via a taste test, so a pepper’s numbers can vary due to human sensitivity.  Therefore, the Scoville Scale is not a precise method.  However, for comparative purposes to illustrate my pain, it’ll do.

The banana pepper falls somewhere between 100-1,00 SHUs. Given the spiciness of the food, I would guess the peppers we used were on the high end, but still, getting the small amount on capsaicin still on my hands almost two hours later into my eye ignited immediate pain.

Another good reason for regular, through hand washing.