Books 2016 is the review, roundup and reflection on my reading through the year. This year I tried to make inroads into my reading list, but only succeeded in adding to it.  I may have to take the Every Book in the House challenge like Ms. Josephson. Fingers crossed that Winds of Winter is printed in 2017 or 2018 to keep my A Song of Ice and Fire pace on track.  Also, have some Batman to read, and I am going to tackle Alexander Hamilton this year. Cheers and happy reading in the coming year!

It’s a fun premise; only the book reads as historical fiction with the main characters taking months to realize what the reader is told early. Also, I unknowingly stated the first book of a two-part series and I HATE doing that by accident. Honestly, not enough sci-fi nor characters engaging enough to read the sequel. 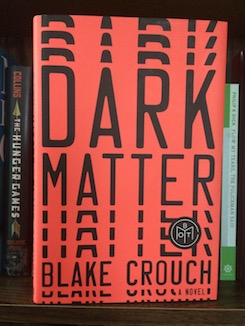 A prose story with many ‘verses.

Dark Matter by Blake Crouch
Honestly, I read this after Blackout to read a harder sci-fi story and clean my mind of Connie Willis’ tale since Blackout was – IMHO – good historical fiction.

Dark Matter dives into the deep end of theoretical physics but reads with the page turning propulsion of a Dan Brown novel.  (That means the book is heady but accessible.)  I was not prepared for the lonely, crushing despair in the latter half before the climax, and read faster to purge the feelings for my own mental health.  Dark Matter got into my head, which is great, and more than makes up for the simple prose and narrative shortcuts the author took at times.

Dark Matter was the first book I received from my gift subscription to Book of the Month club, a gift from my sister.  All in all, a good first pick.

A Feast for Crows by George R. R. Martin
I was warned the fourth in the ASOIAF series was just half a book, only dealing with half the characters, so I was not bothered by half a story. Of course, one of my favorite characters is in it and A Dance with Dragons has already been released, so I do not have to wait years to read more. Martin’s note at the end of the novel dated June 2005 foretold A Dance with Dragons would arrive in 2006. The actual release date was July 2011.

Thoughts on the nearly 1,000 pages of this half a story: Can Brienne catch a break?; Jamie confessing, even to a man without a tongue, may not be a good idea; Cersei, finally, finally has something coming to her (I have taken to calling her Cersei, First of Her Name, the Bitch Who Must Die); I have a guess on who the young queen and the valonqar of Cersei’s prophecy are; more Hotah and the Sand Snakes please; the Iron Islands sideshow was interesting, but if Asha and Lord Rodrik the Reader are not the focus I really do not  care; The Eyrie is a ridiculously impractical castle even in a fantasy world; and Arya better get to f— some s— up soon. If all this set up is just to have her die ignominiously so help me…

Martin uses his prologues as integral plot points, so I am confused as to why they are prologues. In Game of Thrones, the prologue happened years before (and in a different stylistic world then) the main story. The prologue made sense. Why not just make the other prologues the first chapter?

No spoilers for the rest of the series (Books or TV) please.

Flow My Tears, The Policeman Said by Philip K. Dick
The book starts clunky and slow, making characters out of rough sketches and following others too long after they are narrative dead ends. Then, abruptly, the pace quickens and some genuine conflicts lighten the narrative.

The central mystery of the novel – How does a person lose their identity? – maintains engaging even when the author fails to explore it consistently. The other world building – especially universities as defeated, post-war prison encampments – does not.  The genesis of genius ideas is present; uneven execution fails to realize them.

Weeks after finishing the novel, I read this breakdown of the conflict between PKD’s ideas and stylistic execution. “Dick’s stories have unparalleled imaginative properties, but the writing itself is bador at the very least, basic.” The article defends PKD’s style, which I will not do, but it raises an interesting question of where and when, as a reader, do you critique and defend an author? For my take, even the most brilliant authors have crutches and flaws.

Rawling – Brilliant and slave to her structures

Bradbury – Prolific and not always mature

Sam Starts at Shakespeare’s Gone by Pauline Francis and Jane Tattersfield
Children’s picture book about The Bard of Avon. Read as part of a ShakespeareFest event.

William Shakespeare by Haydn Middleton
Young adult picture book about The Bard of Avon. Read as part of a ShakespeareFest event. 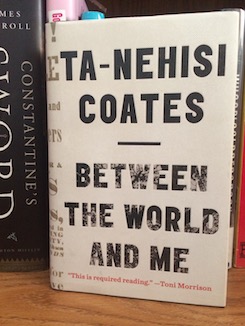 Between the World and Me by Ta-Nehisi (Tah-Nuh-Hah-See) Coates
Good non-fiction distills concepts into easily understood theses.  Mr. Coates thesis: The United States, “America,” the “American Dream,” and the classification of people as “white” are predicated and built upon the destruction of human bodies, be they black or any other “lesser” people.  It’s devastating.

Read this book.  Don’t be a trendy liberal and buy it to sit on your shelf.  Don’t excuse yourself because it’s about the black experience and you’re not black.  Don’t reject it because you only “read for fun” and this will challenge you and make you uncomfortable.  We should challenge ourselves.  We should be uncomfortable.

Between the World and Me is not a lecture; it’s a letter.  Read it.

Influencer by Joseph Grenny, Kerry Patterson, David Maxfield, Ron McMillan, and Al Switzler
Influencer is a leadership book trying to feel like a scientific paper while being accessible at an 8th grade reading level. It mostly succeeds, helpfully illustrating through anecdotes the way to lasting influence must go through personal, social, and structural change; shortcuts are anathema, er, to be avoided. The problem with the book is presentation: it plasters over leaderships platitudes (however truthful) with case studies so spliced and diced the authors have to insert filler to remind you the subjects of their case studies. Given the case studies involve the eradication of a water parasite in Africa and the successful reintegration of felons into society, amongst others, that’s a problem.

I mercilessly highlighted the book’s topic sentences and look forward to using the ideas presented in my much-abbreviated text.

Monday Morning Leadership by David Cottrell
Leadership book with solid reminders on how to work on being an effective leader (er, manager). The writing is a bit too simplistic, a bit too married to its setup/structure, and a bit too quick to be referenced often.

Tension City: Inside the Presidential Debates by Jim Lehrer
A collection of stories on Presidential debates from their beginning and including the 13 Mr. Lehrer moderated himself. A fun, light read for a debate junkie (which I am) or those who like peering behind the curtain.

My critique of Mr. Lehrer’s writing is he has a tendency to jump to a new topic without a transition, either a coda to the current topic or a prelude to the next. The book has themes and a brisk flow, but it feels like a recitation of interesting anecdotes more than a coherent message or story.

Until the final chapter, after all the debates 1960-2008 have been discussed and Mr. Lehrer can make his own argument about civil discussion. It’s a good one.

She Kills Monsters by Qui Nguyen
Agnes discovers her sister Tilly’s Dungeons & Dragons notebook after her sister’s death and decides to play the game to learn about her sister. A sharp, witty comedy laden with ’90s pop culture…and geekery. I will be playing Miles, Agnes’ D&D ignorant boyfriend in a February production for Village Playhouse.

2004 beginning to a series. The writing is crisp and witty, very Whedon-esque, though on paper it lacks the pop of his TV and movie work simply because you cannot hear the vocal inflections in rapid succession.

The art was fine, a little too cartoonish for me and I really did not like the visual depiction of Beast, who is my favorite X-Man. 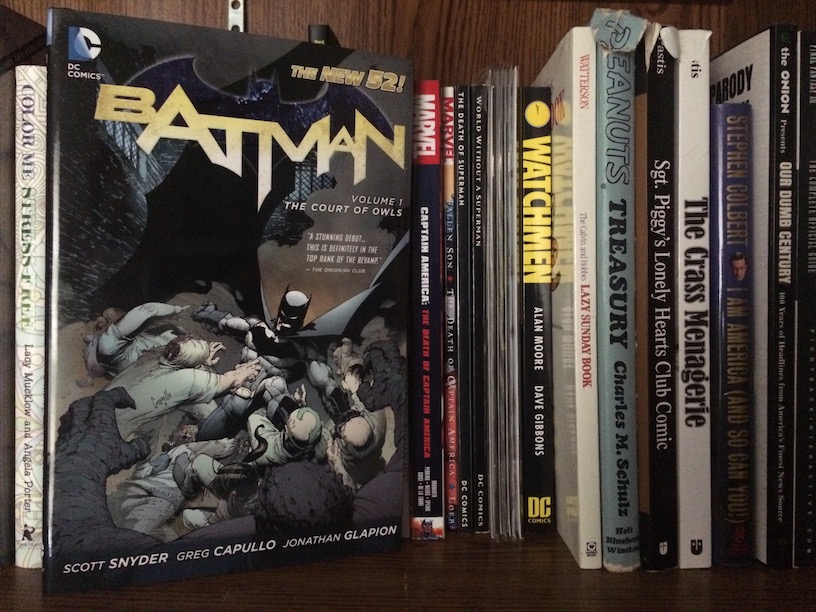 Batman: The Court of Owls by Scott Snyder
Art by Greg Capullo

The Court of Owls is a new villain for Batman. Heroes are defined by their villains; you have to doubt the hero can survive for effective drama. The Court of Owls creates drama by threatening all Batman is. Owls are predators of bats, their existence is a mystery, and the Court are as rich as the Waynes. Snyder does a great job of balancing the three main aspects of Batman: the Dark Knight who physically beats his enemies from the shadows, the World’s Greatest Detective who methodically solves mysteries, and Bruce Wayne the billionaire scion of Gotham. Capullo’s illustrations are a step too far into coarse horror for me, but when the psychological terror comes toward the end it plays perfect. Capullo seems ideal to illustrate a Batman-Scarecrow story.

Thanks to ComicsGeek for the recommendation.

Batman: Year One by Frank Miller
Art by David Mazzucchelli

This was likely revolutionary upon its release in the 80s as who told the story of early Batman? Now that story has been told ad nauseam and better. Miller’s noir is too sexist to be recommended.

Black Panther (#1-8): A Nation Under Our Feet by Ta-nehisi Coates
#1-4 Art by Brian Stelfreeze
#5-7 Art by Chris Sprouse

Black Panther, written by one of the most thoughtful black writers (see Between the World and Me above) currently working? Yes, please!

The writing has been solid, though wavering a bit recently; #7’s action did not capitalize on the variety of superpowers The Crew possessed. Stelfreeze’s art is superior to Sprouse’s which also has made the second act less enjoyable. Sprouse has a particular difficulty rendering realistic eyes (not an easy feat).

Less about the Death of Captain America and more about the immediate aftermath and the political plot that led to his death.  Like most comics, this death stuck for not even a year.

Every comic book character should die if it means a retrospective/review of the effects of death as good as this one.  Structured as the characters moving through the five stages of grief, the art and story beautifully compliment each other. 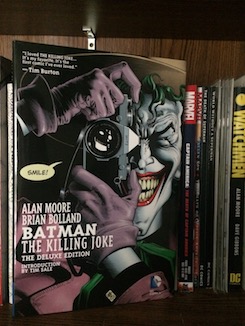 It won’t be his last…or will it?

The art in The Killing Joke is phenomenal.  Brian Bolland did an excellent job, and I enjoy the subdued tones of his recoloring for the deluxe edition.  The story itself is pretty sadistic, but it’s a story about the Joker and he is sadistic.  I was left wanting at the end, because I was led to believe and want to believe Batman finally stopped the Joker – permanently – but I cannot.  Batman is presented as too either/or in his dialogue for me to believe either potentiality for the ambiguous ending.  For a “Hell no he didn’t!” defense read this.

The title is the answer, and yet, it is unrealistic to me that Batman would laugh at the final joke.

Macbeth (No Fear Shakespeare Graphic Novel) by Ken Hoshine
Rewritten in modern American English, the text did not maintain enough of Shakespeare’s verse or phrasing to be long remembered. Illustrations were good, but it was sometimes difficult to follow who was who as all the characters looked similar. The witches were wonderful.