Recently I saw Aladdin in a movie theatre. If you are a fan of watching movies on the big screen, Marcus Theatres often has older films popping back into limited engagements. Watching Aladdin redux after many years was enjoyable, but a fresh, yet familiar, viewing allowed me to notice some things about the Disney classic for the first time.

First thing noticed: The Merchant from the opening credits (“Arabian Nights”) is actually the Genie post his release from captivity. I heard of this theory online but can see it clear on a re-watch.

Music to the Ears: Aladdin is full of pop culture references, but not all come from Robin Williams’ voice as the Genie. When Aladdin has duplicitously weaseled his way into marrying Princess Jasmine as Prince Ali Ababwa, the Genie asks him, “You just won the heart of the princess! What are you going to do next?” I have enjoyed from my first viewing how this line is a call out to the sports cliché, “You just won the Super Bowl! What are you going to do next?” “I’m going to Disneyland!” But on this viewing I noticed right after the Genie’s line four or five notes of the Walt Disney theme – which is played at every movie’s title sequence when showing the Magic Kingdom castle – plays in the background. Nice callout during the callout.

Or like how the movie really could have been named Jasmine.

Aladdin was a step away from the princess as heroine feature, so Jasmine was never going to be the star. Nonetheless, for a Disney Princess who’s not the lead, Jasmine has her own independent storyline and plenty of stereotypical Disney Princess issues (beyond being anatomically impossible to achieve in real life). 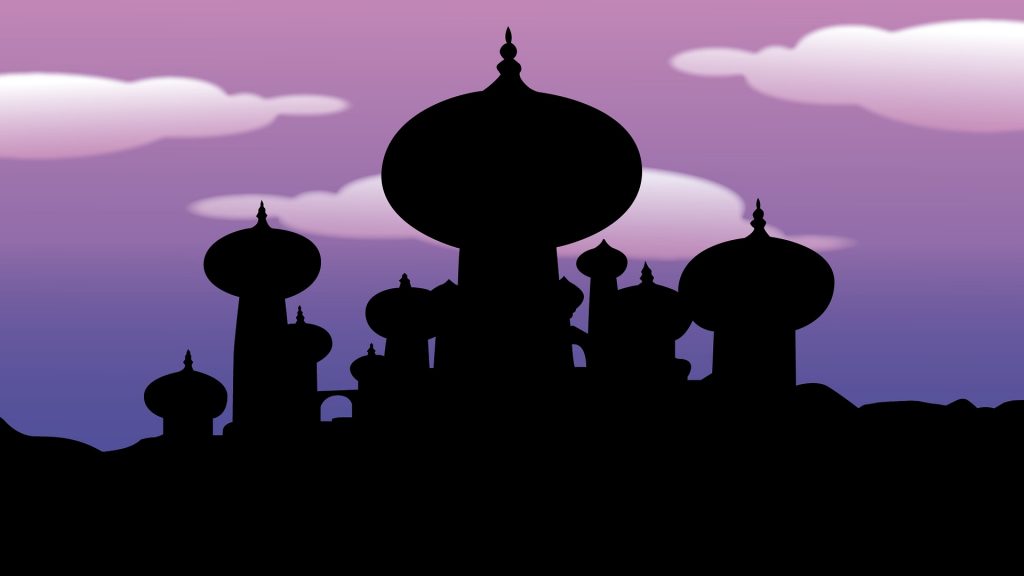 Agrabah, in need of government reform

Calling the movie Jasmine seems so obvious when you review the plot summary.

Jasmine, Princess of the Sultanate of Agrabah, wishes to understand her kingdom beyond the echo chamber of the palace walls. Disguised, she sneaks out and quickly learns the brutal nature of street justice for the 99%. Saved from harm to her royal personage by a street urchin, Jasmine’s savior is abruptly arrested and executed under the mistaken crime of “kidnapping the princess.” Jasmine is devastated over this miscarriage of justice. Vowing to put Argrabah’s bureaucracy to rights, Jasmine goes on a governmental reform rampage. Relaying her emotional tale of woe to the Sultan, Jasmine enacts criminal justice reform. The Sultan’s vizier, who had authority over executions, must now clear all executions with the Sultan first. Thus, a semblance of checks and balances are brought to the sultanate and justice gains another foothold against malfeasance. All because one poor street urchin named Aladdin was beheaded.

What? You do not remember the Jasmine Brokovich B story line? I guess it is not surprising given the moment Prince Ali Ababwa enters the picture (Aladdin dressed as a Prince via a wish) Jasmine resorts to her typical “Princess be doubting misogynistic Princes” self and correctly deduces Ali = Aladdin. Yet Jasmine MAKES NO MENTION of mourning Aladdin’s “death,” does not wonder how Aladdin escaped his imprisonment/execution, and fails to call out Jafar on his duplicitous “Aladdin was executed” BS answer.

After arguing with her Sultan father over marriage Jasmine contemplates her own luxurious captivity. Noticing the birdcage of white birds in her garden with new eyes, Jasmine realizes while she is lamenting her captivity she has been keeping other living being in captivity as well. Jasmine must live her own morality and right her moral failings. She rushes to the cage, throws open the gate, and releases the captive birds to a flurry of flight as they soar toward the sun!

So they may die of dehydration or predation in the desert. Because symbolism.

There is one way in which Aladdin did not age well. The exotic Persian/Middle Eastern Jasmine has a voice as white as the freshly fallen snow she never sees living in a desert. A talented voice actress cannot cover up the Hollywood whitewashing here. Honorable mention to Aladdin on this one too.

One striking characteristic of the movie I had not noticed before is how every humanistic character has an animalistic best friend, a familiar aiding them or connected to their personality.

Aladdin and Abu, the monkey, are an easy spot, as are Jafar and Iago, the parrot, as both Abu and Iago serve to advance the plot in various ways and have full conversations with their human counterparts. While Rajah, Jasmine’s tiger, is certainly easy to spot physically Rajah is unnecessary to the plot. It was Jasmine’s goodbye to Rajah before she slips out of the palace and Rajah’s lamenting whine that tipped me off to the larger theme of human-animal duality.

The Sultan exists without an obvious familiar, but he’s clearly animal obsessed, playing with a menagerie of zoo toys in one scene and loving Prince Ali’s circus parade. Yet there is one animal the Sultan interacts with predominately to that animal’s chagrin: Iago. The Sultan’s familiar is also Iago, in a mirror image sort of way as every time the Sultan see the wise-cracking bird he wants to play with Iago or force feed him crackers. Iago, while Jafar’s friend, confidant, and advisor, is preoccupied with humiliating the Sultan.

The last remaining humanoid is the Genie. Clearly spending 10,000 years in the Cave of Wonders would preclude having an animal familiar? Nope. The Genie and Magic Carpet are not only familiar, but familiars. From the Genie’s first appearance he recognizes Magic Carpet: “Yo! Rug man! Haven’t seen you in a few millennia give me some tassel.” And Carpet’s interactions with the rest of the cast are more familiar than human. Carpet can’t talk (not embroidered mouth), Carpet predominately aids the human characters, and is seen interacting with and hanging out with the other familiars (like trying to stop Abu from grabbing a jewel in the Cave of Wonders).

Movie audience preferences change over the decades, and in the 25 years since Aladdin’s release (you are welcome) audiences expect and tolerate longer films with more reflection in them. The air has really been sucked out of this movie. Aladdin has no time for 60 seconds of dialogue free emotional reflection as the Toy Story characters reservedly accept their fate to be burned up with garbage.

Did you feel all the emotions of the Genie being freed by Aladdin? Great! That means we can wrap up this production, because right afterwards all of this happens:

In under a minute and a half. Half the length of time of the full A Whole New World song. Barely longer than Toy Story 3’s glacier pace of death acceptance.

This movie knows where it wants to take us emotionally, takes us there, and then gets out of Dodge because its double parked and half the audience are minors who need to pee NOW. What a refreshing lack of navel gazing. 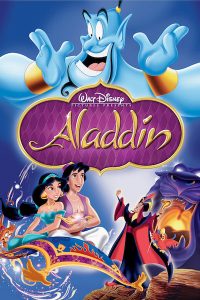