The National Forensic Association (NFA) and the American Forensics Association – National Individual Events Tournament (AFA-NIET) at the turn of the millennium established awards aimed at honoring collegiate forensics competitors beyond the scope of the tournaments they respectively hosted. The two organizations had already established awards for distinguished service to their organizations and the wider forensics activity, yet both organizations saw the need to recognize contributions by competitors and former competitors beyond individual events.

In the approaching 20 years these awards have existed, who has been honored, how did they receive these honors, and what can we learn about the honorees? To try and make sense of these questions I complied the data of every NFA Hall of Fame inductee and AFA-NIET All-American Individual Events Team.

You can review the the compiled data spreadsheet yourself here: AFA-NIET All-Americans and NFA Hall of Fame. (Data considerations mentioned at the end of this post.) 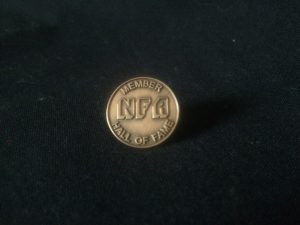 In addition to induction into the NFA Hall of Fame, honorees receive a commemorative lapel pin. New NFA Hall of Fame members are announced at the opening ceremony of the NFA National Championship Tournament.

Anyone may submit a nomination on behalf of any potential NFA Hall of Fame inductee provided they are not self-nominating. The nominee must have completed their competitive careers a minimum of five years prior to nomination, and must have demonstrated three different characteristics. Documentation supporting the nomination must address these characteristics:

A noted criterion for induction is what the nominee has contributed to forensics since leaving the activity.

A noted criterion for induction is what the nominee has contributed to forensics since leaving the activity.

The full list of NFA Hall of Fame Recipients.

The NFA Hall of Fame nomination form and selection process.

Two individuals have been inducted into the Hall of Fame representing more than one institution:

The NFA Hall of Fame groups inductees into “classes” or five-year spans of time indicating when the inductee competed. Currently, there are eight honored classes. The 2011-2015 class only recently became eligible for induction for those who finished competition in 2011 or 2012.

NFA has inducted 89 people into the Hall of Fame in 14 cohorts from 35 institutions.

The first three years of the Hall of Fame inducted 50 individuals spanning 1970-2000. This represents the majority of current inductees as well as includes the only two years where more than four class years added membership. The two class years spanning 1991-2000 have the plurality of inductees at 35.

None of these numbers must overshadow the individual accomplishments of the 89 individuals inducted into the Hall of Fame. Though they bring prestige to NFA and their institutions with their accomplishments ultimately their achievement is as unique as they are. Congratulations. 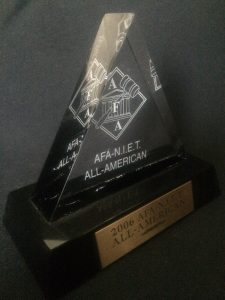 The American Forensics Association-National Individual Events Tournament All-American Individual Events Team was established in 2001 and has been honoring senior competitors attending their last AFA-NIET for each of the subsequent 17 years. Designed to “recognize students beyond the area of competition,” the AFA-NIET All American Team recognizes students who demonstrate scholastic achievement as evidenced by grade-point average, range, and challenge of study; success and good conduct in the forensic activity, specifically the AFA-NIET; and show a commitment to the betterment of their community. The award serves as a “crowning touch to those seniors who have demonstrated outstanding qualities in all three areas.”

In addition to being honored as an all All-American, honorees receive a commemorative paperweight. All-American Teams are named and recognized at the opening ceremony of the AFA-NIET (formerly they were announced at the AFA-NIET banquet).

Additionally, the documentation supporting the nomination sent to the district committee must include the following:

Service outside of the forensic community and academic institution is a significant criterion.

While all service work by the nominee may be included, service outside of the forensic community and academic institution is a significant criterion.

The letters of support must also address the nominee in certain ways. Each letter is required to convey the value the individual has added to the forensic activity in general (e.g., mentoring, good sportsmanship). Additionally, at least one letter of support must address the student’s work in providing community service to their university and the community at large.

The All American nomination form and selection process.

Breakdown of individual All-Americans amongst the eight AFA-NIET districts is stratified.

AFA-NIET has named 243 All-Americans in 17 teams from 64 institutions.

District III, V, VI, and VII are all within 10 honorees of each other. District III averages 1.5 All-Americans per year and Districts VI and VII average two per year. In other words, District VI and VII have had about one honoree more than District III every other year.

None of these numbers must overshadow the individual accomplishments of the 243 individuals who earned the moniker of All-American. Though they bring prestige to AFA, their Districts, and their institutions with their accomplishments ultimately their achievement is as unique as they are. Congratulations.

The criteria for induction into the Hall of Fame and being honored as an All-American are different.

The AFA-NIET All-American IE Team prioritizes service outside of forensics and school. Given the honorees are still active competitors pursuing their degrees, this is a logical requirement to show exceptional work and character of the honorees. The All-American Team also prioritizes academics by setting a minimum grade point average necessary for consideration. NFA does not have a similar academic requirement instead reviewing potential inductees forensics ambassadorship in their careers. 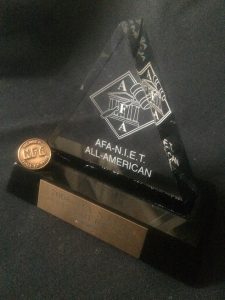 The criteria for the NFA Hall of Fame, which inducts people post-competition, and the AFA-NIET All-American IE Team, which is given to current competitors, is different.  There have only been 17 years where there could be crossover between the two.  In those 17 years there have been four double-inductees:

All four dual honorees were inducted into the NFA Hall of Fame seven years after their being named an AFA-NIET All-American.

My knowledge of active programs is limited. If you know the status of any institutions that should be included or removed from this list, please let me know.

I believe there are three institutions who have All-Americans as alumni that no longer have an active forensics program:

*This list has been updated since posting with information provided by readers.

I believe there is one institution who has an alumna Hall of Fame member that no longer has an active forensics program:

*This list has been updated since posting with information provided by readers.

I have made every effort to make the data consistent across both the AFA-NIET All-American Teams and the NFA Hall of Fame.

The data on the national organizations’ websites is inconsistently coded as a result of institutions changing names (St. Petersburg Junior College is now St. Petersburg College), inconsistent grammatical naming (University of Texas-El Paso vs. University of Texas at El Paso), or the website contained spelling errors (All-American 2003, University of Texax-Austin). Similarly, the AFA-NIET All-American class years are not listed by district but are partially chosen by district. Therefore, I have matched each institution to their appropriate district. While I believe I have made all data consistent and correct, please contact me if there are any discrepancies.

The 2017 AFA-NIET All-American IE Team was named and honored at the NIET this year, however, the names have not yet been posted on the AFA website.  Here is the 2017 team.

A variety of individuals either provided me information or reviewed this post in one of its drafts forms.

And the No Apology Advocate herself: