My Last Wife, based on the Robert Browning poem My Last Duchess, tells the story of a Senator and his love, obsession, and jealousy toward the women in his life.

The film was created by a talented group of Concordia College students for their senior Film and Literature Core Capstone project.  They wrote, produced, filmed, directed, and edited the work.  I, along with a couple of other actors, were asked merely to lend our acting talents.  My Last Wife, along with two other student films, was screened at the community owned and operated historic Fargo Theatre. 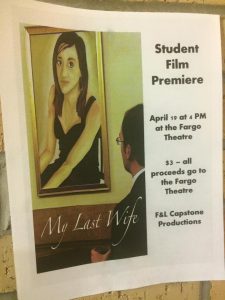