Shakespeare's early farce has Egeon, an old man sentenced to death; Egeon's lost twin sons, Antipholus and Antipholus, unaware the other exists; the two sons' twin servants, Dromio and Dromio, also unaware of their twins' existence; and the wild and escalating misunderstandings from unwitting encounters and a scorned wife. Its the definition of a Comedy of Errors.

"For slander lives upon succession,
For ever housed where it gets possession." -Balthazar

What Is Original Practices Technique?

How did Elizabethan actors memorize up to twenty shows at once?
How would anyone sit through long productions?
When would an acting company find time to rehearse?
According to Original Practices the answer to all of these is: they didn’t.  This is Shakespeare performed at high velocity, with lots of pantomime movement to make the language clear, and where the dick jokes are not lost in flowery poetry.  Audience involvement is encouraged. 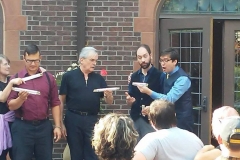