The now annual books of the year list takes its third bow next week. The impetus for tracking what I read each year — other than inspiration, accountability, and memory — started as a bonus list tacked onto the end of the Movies 2014 list.  Books 2014 was just a list, yet I am expanding it for this #TBT to provide what I remember of these books.

A memory test three years later, here are the books I read…in 2014. 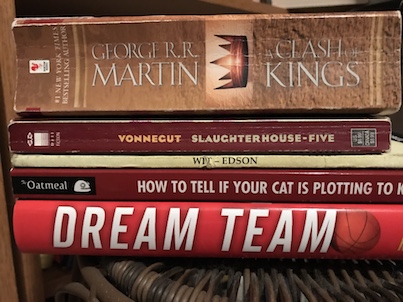 I remember enjoying the book but being disappointed. American Gods felt pedestrian compared to the higher esteem it was held in by my friends and accomplices. Another reason to consume media without expectations. Shadow carries the story well; I was endlessly intrigued by Mr. Wednesday’s intrigues; the subplot around Shadow’s wife was engaging; and I did not predict the climax. What I remember and enjoyed most were the little touches of the divine. The jinn cabdriver, Bast and her cats, and the vivid imagery of Shadow’s final test, made more of an impression than the plot. Kudos to Neil Gaiman for setting most of the novel in Wisconsin.

Each entry in ASOIAF I remember in a specific way. Game of Thrones is Direwolves, Syrio, and the final execution. A summary of Storm of Swords reads as an endless list of, “Wait, that happened too?” And so on up through Dragons. Clash of Kings, the second entry in George R. R. Martin’s realpolitik epic fantasy, is remembered for one thing: Daenarys’ prophecy-laden visions when visiting the Undying in Qarth.

I have revisited that slim chapter every book since Kings, pouring over the words and attempting to figure out what has come to pass and what remains to be realized. I immediately recognized the importance of the chapter (having heard of The Red Wedding before reading any ASOIAF) and wrote my predictions for the visions’ meaning(s) before moving on.  Some of my predictions have been mostly true, some really off-base (or so it appears), but none are as amazing as how Martin has neither abandoned the prophecy nor become hogtied by its allusions. Daenarys’ visions are a statement to Martin’s genius. 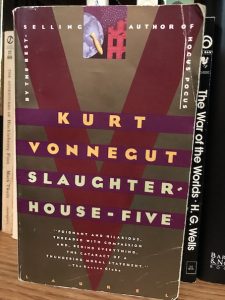 And so it goes.

War novels are – in my experience – weighty even when they are short. Kurt Vonnegut manages to both lighten the weight and effectively manufacture it with a blending of science fiction and memory. Slaughterhouse Five earns its place in the celebrated war novel cannon by refusing to be forgotten. Though I prefer Minnesotan Tim O’Brien’s masterful The Things They Carried for a deeper analysis of memory, writing and war’s effect on an author, Vonnegut’s unreliable Billy Pilgrim generates many more questions.

Why We Are Hungry by Dave Eggers

Short story collections are by definition uneven. Even if you love every story, each is it’s own separate piece of art (Ray Bradbary’s The Illustrated Man notwithstanding). Dave Eggers’ collection starts with my least favorite attempt about visiting Egypt on horseback, but ends masterfully with the dogs who race and jump over the river. In between is my favorite – literarily – with the well foreshadowed story of a woman climbing Mt. Kilimanjaro. The titles have escaped me, but the feelings still remain.

Dream Team: How Michael, Magic, Larry, Charles, and the Greatest Team of All Time Conquered the World and Changed the Game of Basketball Forever by Jack McCallum

The personalities of the Dream Team explode off the page (“Charles Barkley Dead!”), while the stories and remembrances of the team, about the team, and by the team are endlessly entertaining. What I remember most, however, is the erudite writing. Jack McCallum had me reaching for the dictionary every page but never broke narrative. Basketball fan or not, read this book.

Succeeding with Agile by Mike Cohn

I do not remember much that I can definitively state came from the book.  I read it while learning Agile and, while helpful, was more reference than teacher. 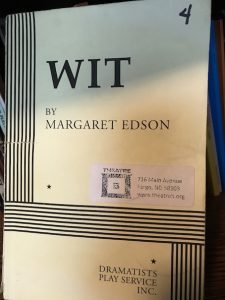 “Professor Bearing. How are you feeling today?” – Jason

Reading this play is intimately tied with performing in my first stage production ever as Dr Jason Posner at Theatre B. What I remember of reading W;t was the economy of language. Akin to a Stephen King short story, no word was wasted, no scene superfluous, no allusion left hanging. Margaret Edson earned her Pulitzer.

Another Theatre B production in which I acted, 33 Variations was a satisfying theatre experience and a disappointing read. If W;t is flawless dramatic script, 33 Variations is a promising first draft. Reading 33 Variations felt full of unrealized promise – fascinating use of music written on the script pages devoid of meaning because read instead of heard, and hard to visualize scenes of weight and importance do to many shifting timeframes. Basically, 33 Variations brilliance comes from a fully realized performance where language, acting, and music and be experienced simultaneously, a synthesis the page cannot replicate alone.

Spoiler: They are. Crass, yet hilarious.

In 2014 I stated Dream Team was the standout on this list. Approachable yet erudite, funny and touching, it is both good history and entertainment. I stand by that assessment, if only because its the best read. W;t and 33 Variations are at a disadvantage as they shine most when performed, and I now have the hindsight that Martin’s best would come with Clash of Kings‘ sequel.

Three years on, however, memories are still strong. The books of 2014 make a good list.